In the purview of the Government of India’s ‘Fit India Campaign’ the institute organized a marathon-style timed race on its lush green campus. There were 3 variants of the run- 2.5km, 5km and 10km. Over 670 participants took part in the run from various age groups, the youngest being a child of age five and the eldest being eighty plus. 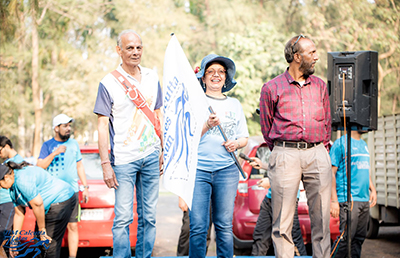 Athlete Arun Kumar Singh began running at the age of 52. Competing in several state, national and international meets, Mr. Singh has run over thirty marathons and has won a gold medal at the age 67 at the Asian level. Encouraging the runners alongside was Elvis Jackson who has been a professional physical instructor since the last thirty-five years and has represented India in the World Darts championship as well as Grade 1 umpire of The Cricket Association of Bengal.

The event was conceptualized and executed by the Convenors Bhanu Kumar Paliwal and Hunar Gandhi (MBA students of IIM Calcutta).

Post the event, there were dance performances choreographed by the IIM Calcutta Choreography Club and a concert by Students' band- JBS Baro-C to conclude the evening on a musical note.