The Logical Reasoning section in the MBA entrance examination tests your problem solving skills, as you tackle problems in the form of images, figures or diagrams and puzzling questions that require some level of abstract thinking.

To help you prepare better, it is important to familiarise yourself with the type of questions you can expect in this section. Some of them include:

Usually, these questions ask you to test whether the statements are implied in the given statement or not. For instance,

Statement- "If you trouble me, I will slap you." - A father warns his child.

Assumptions- i. With the warning, the child may stop troubling him.

ii. All children are basically mischievous.

A. Only assumption i is implicit

B. Only assumption ii is implicit

C. Either i or ii is implicit

D. Neither i nor ii is implicit

E. Both i and ii are implicit

The father warns her child with the expectation that he would stop troubling him. So, I is implicit. The general nature of children cannot be derived from the statement. So, II is not implicit.

For such questions, you must be able to identify the assumptions of the author. Do not make your own assumptions while attempting questions in logical reasoning. Strictly go by what is given to you.

The best way to identify if a given statement is an assumption is to ask the question ‘why’.  It is an assumption if it answers the question, otherwise it is not. For example, in the statement, ‘if you are a teacher, we have a job for you’, ask yourself why is the advertisement done- the answer is because a teacher is needed. Assumptions cannot be exclusive in nature, which means, words like most, best, always, all and the like cannot be a part of assumptions. The statement and assumption have to be related to each other to be valid.

Number series can be based on various combinations, such as

i. Constant difference- In this type of series, any two consecutive numbers in the series will have the same difference between them. For example- 1,3,5,7,9,11

ii. Increasing difference- In this type of series, the difference between two consecutive numbers in the series keeps on increasing. For example- 2,4,7,11,16

iii. Decreasing difference- In this type of series, the difference between two consecutive numbers in the series keeps on decreasing. For example, 16,11,7,4,2

v. Mix of various operations- In this type of series, more than one arithmetic operations need to be applied or two different series can be combined to form one series. For example- 2,10,3,11,4,12,5,13

A Venn diagram uses overlapping curves, usually circles to organize things and highlight how the things are similar or different. Venn diagrams help to visualise the given data clearly and derive the right conclusions from it. For example,

All humans are dogs

Socrates is a human 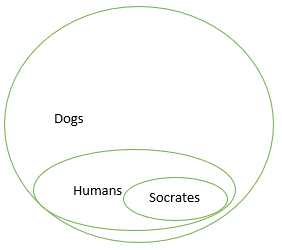 How to solve Venn Diagram?

The whole point of drawing up Venn diagrams is to simplify the given information and make sense out of it.  To depict this information, circles are used. The larger item in the information is depicted by a circle first, followed by circles depicting other items in the information. Finally, the relation between the larger item and other items is depicted by aligning these circles appropriately. For instance, to draw a Venn diagram that best depicts the relation between Sports, Cricket and Football, we would first identify the larger item in this statement, that is, Sports followed by Cricket and Football. Hence, the Venn diagram shall be: 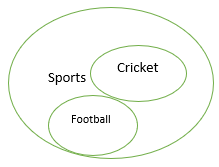 The Venn diagram for this will be overlapping circles,

How to tackle Syllogisms?

To tackle questions based on syllogism, the following points must be kept in mind:

1. Prepositions are of four types, namely:

Conclusions can be derived by applying the following rules:

a. It is not possible to get universal conclusion with two particular statements.

b. It is not possible to get negative conclusion with two affirmative sentences.

c. It is not possible to get positive conclusion with two negative statements.

b. A Universal Affirmative statement when reversed, gives Particular Affirmative as conclusion.

d. A Particular Negative statement when reversed, does not give a conclusion of any type.

Venn Diagrams can be used to tackle Syllogism based questions.

Rules to keep in mind while using Venn Diagrams 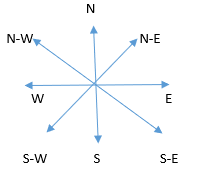 Points to keep in mind

You should be able to do most questions that require you to find the distance, using the Pythagoras theorem, which states that in a right- angled triangle, Hypotenuse2 = Perpendicular2 + Base2  .

For instance, A man goes 3 kms East from point A and then takes a right turn from point B to move 4 kms to point C. What is the minimum distance between point A and point C?

The figure drawn for this question will be, 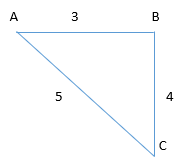