“We will work with MDI as a hub for good governance in Commonwealth countries,” the Rt. Hon. Patricia Scotland QC, Secretary-General of the Commonwealth, said while delivering a speech on the theme “Smart Governance for SMART Commonwealth – From Vision to Implementation” at the MDI Gurgaon campus here.

“I believe that together we can narrow down, if not eliminate, the digital divide across Commonwealth countries,” Scotland said. 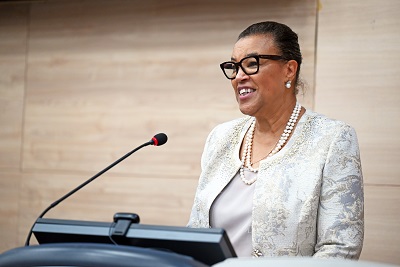 The Commonwealth Secretariat has launched an online training programme on performance management for member governments. The training is designed to boost efficiency and improve delivery of public services – crucial to the welfare of all citizens but especially the marginalised and vulnerable in a post-pandemic world.

For this, the Commonwealth Secretariat has developed a proprietary software called SMART (Strategic Management and Accountability Results Toolkit) as a tool for implementation of an effective Government Performance Management System (GPMS).

Scotland said that Commonwealth countries are rich in diversity.

“We have advanced economies and developing countries. We have some of the largest countries and some of the smallest,” she said.

But, she said, many of these countries suffer from digital divide and implementation divide, adding that South-South cooperation is needed to develop the Commonwealth.

“The underlining causes for poor governance are mostly common across governments,” the Secretary-General said.

She also called for digitisation of trade among Commonwealth member states.

She described the importance of India for the Commonwealth as “absolute”.

Pointing out that, of the 2.6 billion people in the Commonwealth, 1.3 billion are in India, the Secretary-General said: “India has made many of our member states believe that change and development are possible.”

“A government that delivers what it promises is what we call good governance,” Prof. Trivedi said.

Earlier, while welcoming Scotland, Rajnish Kumar, Chairman of the MDI Board of Governors, said that when it came to quality governance, “there is a huge gap”.

“We are celebrating the 50th year of Management Development Institute,” Kumar said. “We believe that as far as public policy is concerned, we want to be a think tank and contribute as much as possible. We are happy that the Commonwealth Secretariat has chosen MDI to be its partner in its initiative.”

Given that public policy and governance have become areas of utmost importance in today’s world, MDI Gurgaon launched the Post Graduate Diploma in Management – Public Policy and Management (PGDM-PPM) in 2006. It was one of the earliest business schools to offer a management programme in the field of public policy. The PGDM-PPM programme seeks to enhance the sensibilities and capabilities of the participants to better manage public policy and systems as well as to make them understand the global trends and practices in these areas to allow exploration of innovative options and choices.