The students of MBA Part time, MBA Part time – Social Entrepreneurship and Executive MBA programs organized the first ever Social Conclave of part time and executive programs on Sunday, 1st March 2020. Event was scheduled at 2 pm in Mukesh Patel Auditorium at Vile Parle (West). The theme for this year was ‘Ek Prayas’ to celebrate the journey of 2020 Padmashri Awardees and facilitate Smt. Rahibai Popere, popularly known as ‘Seed Mother’ and Shri. Popatrao Pawar, former Sarpanch, Hiware Bazaar, Ahmednagar. Both the Padmashri awardees are examples of life-time commitment to a cause & hence the title, Ek Prayas, which translates into giant effort.

He took the audience through his journey from his education in Pune, cricketing days and returning to Hiware Bazaar and transformation of the village. He explained the initiatives he undertook in water conservation as Sarpanch of the village, challenges and innovative solutions to overcome the challenges. The most prominent initiative is the concept of Water Budgeting. Water Budgeting hinges on the concept of “amount of water village uses is equal to the amount of water the village conserves”. He also explained how the village moved away from high water consuming sugarcane which made a lot of difference in conserving water. In Maharashtra about 73% of water is used in sugarcane fields which constitute only about 3 % of the cultivated area.  Apart from water conservation, his other initiatives were making Hiware Bazaar Open Defecation Free (ODF), which happened in 1992 and also alcohol and mosquito free. Women empowerment was his another initiative and all houses in Hiware Bazaar have the name of the lady first followed by the name of man of the house. The legal title of the house is in the name of the lady.  Due to all these initiatives Hiware Bazaar is today a prosperous village with no BPL families. Improved agricultural infrastructure and prosperity reversed the trend of rural to urban migration with 70 families earlier belonging to the village reverse migrating from Mumbai, Thane and Pune to their village.

She explained her journey of conserving native varieties of seeds and encouraging farmers to give up hybrid and genetically modified variety of crops. As an agriculturist Smt. Popere was motivated to take up organic farming using native variety of seeds. This was in contrast to the intensive use of chemicals and fertilizers which was over years degraded the soil and was harmful for the consumers of such grains, vegetables and fruits. As explained by Smt Popere the older generation used to live up to 100-110 years while the current generation struggles to live up to 60-70 years and are prone to diseases such as heart ailments, cancer and diabetes which can be prevented by consuming organic agricultural produce.  With support from her family and the self-help groups through the concept of Seed Exchange she conserved traditional seed varieties and distributes them to farmers for cultivation.

In her talk, she emphasized the need to reduce the chemicals in the crops to reduce the ailments. She also emphasized the need to have a kitchen garden for the benefit of good health and longevity. She said even if one meal is there for the family but it needs to be nutritious and organic meal. She concluded the talk with the inspirational words “today I have all the wealth but I will continue to work on the field with my 3,000 women”. 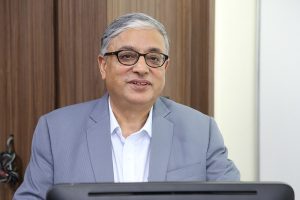 He explained his engagement with the Social Cause in the areas of mental health in the villages of Gujarat. In his research project with NIMHANS Bengaluru and B.J. Medical College Ahmedabad he studied villagers’ behaviour and responses towards mental health by conducting behavioural experiments. He also highlighted his association with SEWA in their insurance schemes for the economically weaker sections of the society. 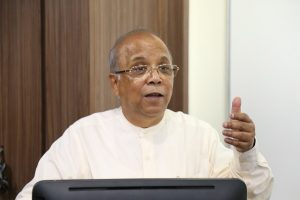 He explained the famous Shirpur Model of Water Conservation initiated by Chancellor Shri Amrishbhai Patel and how the arid region of Shirpur was transformed into an agriculturally rich region. He also explained the transformation brought about by the Hon. Chancellor in the region through providing quality education and employment opportunities. The Audio Visual show presented this inspiring work. 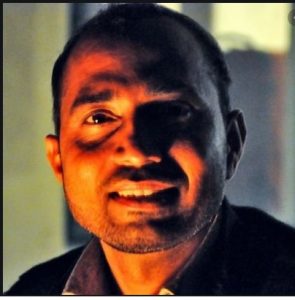 Our Alumnus Shri Bhagwan Kesbhat was felicitated and awarded the distinguished alumnus award for his contribution to the social sector. His initiatives include water conservation as part of Paani Foundation and environmental awareness through his NGO Waatavaran.

In the end, Vote of Thanks was proposed by Dr. Meena Galliara, Director Jasani Center and she thanked everyone who has been part of organizing the function and the audience.

Popatrao Pawar: Popatrao Baguji Pawar (born 1960) is the former Sarpanch of Hiware Bazar, a gram panchayat in Ahmednagar district of Maharashtra India. He is the Executive Director of Maharashtra state government’s Model Village program. He is credited to have transformed it from an impoverished village into a model of development that the government of Maharashtra wishes to implement across the state. Pawar led Hiware Bazar’s transformation from a drought- prone village to a green and prosperous model village. He featured in an India Today cover story as the person who demonstrated how rural water resources could be revived. The Hiware bazar gram panchayat, with Pawar as its sarpanch, won the first National Award for community led water conservation in 2007.

Rahibai Popere: Rahibai Soma Popere born in 1964, is an Indian farmer and conservationist. She helps other farmers return to native varieties of crops, preparing hyacinth beans for self-help groups. She is among three Indians in the BBC list of “100 Women 2018”. Scientist Raghunath Mashelkar gave Rahibai the epithet “Seed Mother”.