Indian Institute of Management Kashipur hosted its sixth edition of TEDxIIMKashipur, an independently organized TED event on the online platform, on 7th November 2020. The TEDx journey of IIM Kashipur started in 2014 with a simple idea, to conduct the event for the students of IIM Kashipur with the theme ‘Ideas in Action’. This year had been a tough year for all, hence the theme, Colours of Humanity which featured people who have broken out of their shell and have done something uniquely phenomenal with their lives. The session was opened by Prof. K M Baharul Islam, Dean (Academics), IIM Kashipur.

The panel of distinguished speakers at the IIM Kashipur TEDx event included Chef Vanshika Bhatia who has taken the culinary world by storm by being an advocate for using sustainable techniques and locally sourced produce in commercial kitchens and Ms.Smita Singhal, founder-director of Absolute Water which was conceptualized in 2015 in Delhi Jal Board where her innovative solution created a daily supply of 1 lakh liters of spotless and clear safe drinking water. Social activist and an advocate of the "Gift Economy", Udaysinh Ramanlal Jadav who is no less than a celebrity for the people of Ahmedabad and many film stars have taken a ride with him. Aishwarya Sridhar, an Indian wildlife photographer, wildlife presenter, writer, and documentary filmmaker from Navi Mumbai, who believes in the power of visual communication and its ability to bring about a transformation in the world. Ranjith Mukundan, CEO & co-founder of Stellapps Technologies and has bought an usher in the second milk revolution in India. Divas Gupta, a passionate trainer, an internationally certified Master Career Practitioner, and a management scholar from IIM Kashipur, who is helping millions to live a purposeful life. Trans-woman and human rights activist Ms. Nishtha Nishant, who has an active advocate for spreading scientific awareness and for the rights of the LGBTQI+ community joined the panel of TEDx IIM Kashipur as its distinguished speakers. 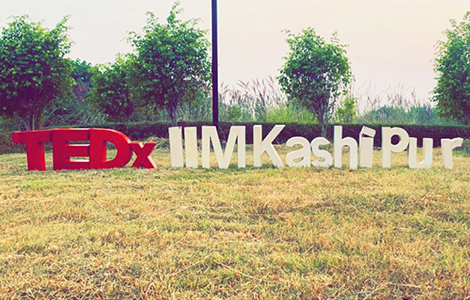 Chef Vanshika Bhatia emphasized the importance of one’s association with the cultural roots and also laid the spotlight on the necessity to revive our biodiversity and preserve them. She also advised about applying the learnings from our culture for the betterment of the planet earth. Nishtha Nishant talked about the significance of getting rid of predetermined notions and the necessity of being humane, valuing each one’s life by connecting and interacting with people, and arriving at conclusions based on real facts. Smita Singhal motivated the community with her impeccable research path and also stressed the perceived thoughts of the public, which hampered her vision of resolving the water scarcity problem by making potable water from sewage water. Aishwarya Sridhar gave an eye-opener to possess the tolerance and understand the ideologies and differences of fellow beings for letting the original color of humanity shine through each one of us. She also stated the significance of traveling and its impact on a person's life. Divas Gupta talked about the ways to identify Ikigai in life by exploring the true inner color of oneself amongst the infinite colors that an individual possesses. He also shared the valuable Crules which he regards as Challenge rules to ultimately achieve Ikigai in one’s life. Uday Bhai spoke about his journey of serving others on October 21, 2010, on the auspicious day of Dussehra and talked about the art of giving back to the community selflessly and wanted each one to spread happiness and love in the country. Ranjith Mukundan focused on how we have shifted from the Drink Milk society to the Eat Milk paradigm and digitizing the dairy supply chain as packaged milk will warrant better visibility, quality, and assurance.

The event TEDxIIMKashipur was a celebration of those who shared their mesmerizing experiences and the “talk of their lives encompassing on the importance of being compassionate, valuing one’s roots, finding Ikigai in one’s life and ultimately stressed the concept of giving back to the community.