"Xpressions'19", the flagship Management-Cultural fest of Xavier Institute of Management, Bhubaneswar, concluded successfully on the 10th of November. Spread over three days from the 8th to the 10th of November, the fest witnessed a huge number of participants from several reputed institutions across India. Pitch it Abroad was well received by all and the Team Har Har Mahadev (Nikunj Saraf and Purvai Kumar) was declared the winner with the 1st runners up being Team Cancelled Trips (Anshuman Sarangi and Maitreyee Ghadigaonkar), and the 2nd runners up were Team B2G (Komal Panigrahi and Anubhav Jogi).

The day was closed with an enthralling performance by Underground Authority and with Kumar Varun tickling the funny bones of the audience.

The penultimate day of the fest was packed with a variety of events, beginning with several business events such as XIMB's very own Model United Nations and the flagship case study competitions name Maven and Jack of all Trades which tested the acumen of the future corporate leaders. Jack of All Trades showcased a fine display of tactical manoeuvres amongst teams trying to outwit each other.

Goonj, the solo singing competition where all the talented vocalists came on one podium and Pratibimb, face painting competition presented a means to the students to unwind from the daily curricular activities. Pratibimb was won by ITER (Shatabdi Chakraborty, Nikhil Singh). 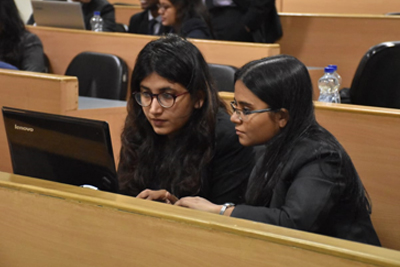 Flight of Fancy, an event organized by the Literary society of XIMB and Vakritva, a CSR plan competition witnessed unmatched enthusiasm from all the participants.

TradeWars was won by Team VAM from IIM Vishakapatnam (Vaishali Chandani, Aman Dev) and the runners were up: Team Hojayega (Harshil Shah). In the evening Carnival De Vogue, XIMB’s fashion competition went underway and the day was concluded with an electrifying night with Sunburn.

Paint@ XIMB gave an outlet to students to express their creativity. In the senior category, ITER, BBSR took home both the prizes with Dibyabeena Hota as the winner and Vaishnavi Thakur as the runner-up. DAV CSPUR did an encore of sorts by waltzing through the junior category as Himansu Sekhar Sahoo pipped Aarya Panigrahi by the closest of margins. 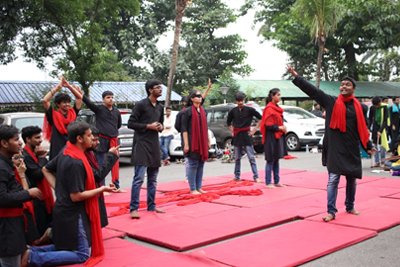 The Final Cut, a short film making competition saw a range of submissions on the theme “Sangharsh” from budding film-makers. Team ‘Up To You’ from ITER, BBSR won the first prize while team ‘Loyalites’ from Chennai went home with the critics` choice award.

Thirkan, the dance competition of Xpressions finished with several laudable performances. The ‘Vigoureux Crew’ from Ravenshaw University, Cuttack won the group dance event after a tough competition from team ‘Danza’ of ITER, BBSR. Devjyoti Goswami, of Sophitorium College of Engineering, Bhubaneswar captivated the hearts of the audience and walked away with the trophy of the solo dance category. The Marketing Association of XIMB organised the Maxim Mela for the three days, which is a form of disguised research and helps them gather unbiased, real-time choices of customer about products and/or brands. This data is used for further analysis to solve real-time problems faced by associating companies. The curtains came down on Xpressions ’19 with Celeblitz, the celebrity night. XIMB was honoured to host the magical Bollywood singer, Mika Singh, who astounded the audience with his popular hits. His set-list was a combination of his compositions, which were deliriously lapped up by the enthusiastic crowd. His performance was a fitting coda to Xpressions ’19.