In the backdrop of the alarming impact of global warming, over 170 countries, including India,signed the historic Paris climate agreement on 22 April 2016, aimed at slowing global warming and helping poorer nations affected most by it. It was an unprecedented and welcome outcome after the failure of its predecessor in Copenhagen in 2009.

Once ratified by at least 55 countries which together account for at least 55 per cent of global greenhouse gas emissions, the agreement will come into force, binding developing and developed nations to begin work on cutting greenhouse gas emissions to combat global warming. The aim of the agreement is to hold the increase in the global average temperature to well below 2°C and to pursue efforts to limit the temperature increase to 1.5°C above pre industrial efforts and to increase the ability to adapt to the adverse impacts of climate change.

India, often seen as the country that can make or break the deal, has maintained that the burden of fighting climate change cannot be put on the shoulders of the poor after decades of industrial development by the rich nations. The agreement puts the major responsibility on developed nations to drastically cut their carbon emissions and provide the necessary finance, technology and capacity building for developing economies to mitigate and adapt to climate change. Developed nations have agreed to raise $100 billion annually by 2020, with a commitment to enhanced financing thereafter. However, India sought $2.5 trillion in finance for achieving its Intended National Determined Commitments by 2030, so the global commitment of $100 billion pales in comparison. 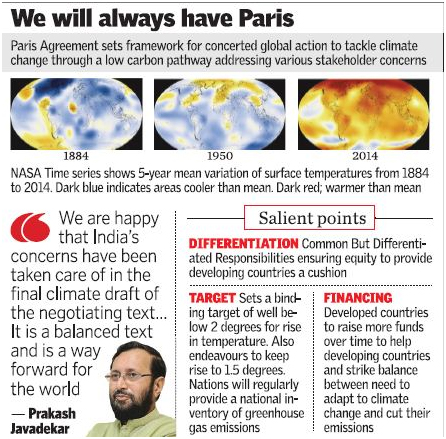 India, realising the grave risks of climate change, has announced plans to quadruple its renewable power capacity to 175 gigawatts by 2022 as part of the government's plan to supply electricity to every household. It seeks to add 100 gigawatts of photovoltaic capacity, 60 gigawatts of wind power, 10 gigawatts of biomass and five gigawatts of hydro projects. Other measures such as taxing oil, cess on coal point out to the emphasis on alternative sources of renewable energy. The 1.5°C target will avoid putting the lives of millions along India’s coastline and those dependent directly on agricultural yields at risk.

Given that India is a developing nation, its energy needs will be greater in comparison to the developed countries. India requires a great deal more energy in the coming decades, for commercial cooking fuels, access to electricity, and power for industries and commerce to provide livelihoods. Therefore, it was important for India to ensure that it does not give away its energy future. The principle of “common but differentiated responsibility and respective capabilities” embedded in the underlying Framework Convention on Climate Change safeguards India’s interests. Without this safeguard, all countries would have placed at par. India, despite contributing little to the problem as compared to the developed nations like USA and having limited capacity to address it, would have been placed under undue pressure to prematurely limit emissions.

However, the agreement might hinder India’s efforts to galvanise global funds to bring 24/7 electricity to all parts of the country, as this would increase coal mining and hence, go against the finance clause in the agreement that discourages use of non-renewable sources of energy.

As citizens of the world, we have a certain responsibility towards the future generations, to leave our planet Earth healthy and in good shape for them. The Paris Agreement is certainly a major step in that direction, but, in no way enough.